Ryan Rash is from Crockett, Texas and grew up showing every species of livestock. During his junior show career, he exhibited 13 Grand or Reserve Grand Champion Steers at major livestock shows all over the United States. He graduated from Texas A&M University where he was also a member of the National Champion Intercollegiate Livestock Judging Team. During his collegiate judging career, Ryan placed in the Top Ten Individuals of every collegiate contest he entered as well as placing in the Top Ten of Oral Reasons in every contest as well as the high points individual in 5 contests. He currently works for the Texas Junior Livestock Association and The Showbox. In addition, he owns and operates SBCC, a cattle company, and a consulting firm that has an incredible track record. He has selected all and supervised the Grand Champion or Reserve Grand Champion or Reserve Grand Champion steers for junior exhibitors at Dallas, San Antonio, Austin, and Houston Livestock Shows.

He and his family have a club calf operation as well as a purebred Charolais and Hereford operation. He has judged both nationally and in every livestock species area at shows from the local level to major show level throughout 43 states, Canada, and Mexico. 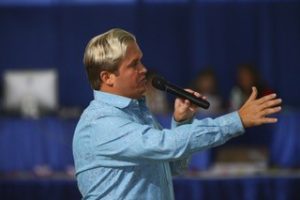 Our breeding judge for 2019 is Mark Hoge